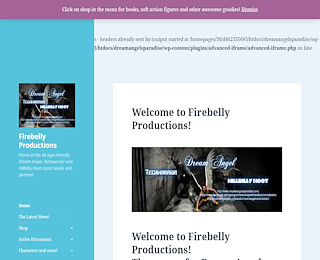 Batman, Thor, Wonder Woman, Ms. Marvel, Superman, just to name a few hero comic book series. More partiularly, super hero comic book series. All Dream Angel really shares with them is the genre. When it comes to story and especially art, Dream Angel and Techwarrior stand alone. Rendered in stunning CGI 3D with Photoshop-drawn “chibi” characters for comic emphasis, these two series showcase the best of both Western comic books and Eastern Manga: A fantastic realistic art style with cartoony comic emphasis to counteract the realsitic beauty. Between the two, both Dream Angel and Techwarrior have a wonderful playful style that’s unmatched and unique.
With such a playful, engrossing and witty art style, only a playful witty and engrossing story could match. Both hero comic book series have exactly that. The two have that unique beauty and quality to them that makes them both wonderful standalone series fans of all ages can and do easily enjoy. The stories have a wonderful “Golden Age” feel while the art has a stunning modern CGI beauty that’s constantly changing as the artist improves and learns new techniques.
Then there’s the charming “chibi” characters rendered in Photoshop. These hand-drawn characters with their over-the-top emotions provide a humorous contrast to the CGI rendering that brings them out even more. Against the highly realistic CGI, the Photoshop-painted characters with the extreme emotions pop out even more than if they were against a hand-drawn scene. Not only do they look silly by themselves, but they’re hilariously out of place against the CGI despite being perfectly timed within the story that they’re set off perfectly for maximum effect.
For a hero comic book series to have such wonderful humor and contrast is growing less and less common as the medium becomes less and less for kids. Having two series designed for kids with such playful humor and contrast makes them both a lot of fun to work on.